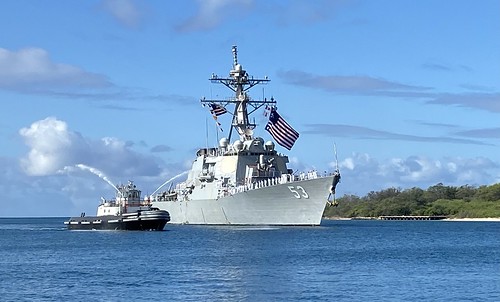 PEARL HARBOR – A Pearl Harbor-based guided-missile destroyer returned to her homeport following a deployment to 5th and 7th Fleets, April 30.

Arleigh Burke-class guided-missile destroyer USS John Paul Jones (DDG 53) and an embarked detachment from Helicopter Sea Combat Squadron 6 conducted operations in the Indian and Pacific Oceans and the Arabian Sea, both independently and as part of Carrier Strike Group 11.

“I am incredibly proud of the accomplishments of John Paul Jones during this deployment,” said Rear Adm. Christopher Sweeney, commander, Carrier Strike Group 11. “Operating from the Western Pacific to the Arabian Gulf, they exported peace, conducting operations and joint exercises with our allies and partners around the globe, improving interoperability and capabilities to help secure the maritime domain. Despite myriad challenges that come with operating at sea during a pandemic, this team rose to meet every one. Our nation appreciates your service to our country and thanks your families and friends for their sacrifice and support.”

During their time in the 5th Fleet area of operations, the crew of John Paul Jones conducted maritime security operations alongside regional and coalition partners. They participated in multi-lateral exercises Nautical Defender 21 with the UK and Kingdom of Saudi Arabia, and Iron Defender 21 with the United Arab Emirates. They provided overwatch for commercial and military vessels transiting the Strait of Hormuz as part of Coalition Task Force (CTF) Sentinel, and while operating in direct support to the Combined Maritime Forces, John Paul Jones successfully interdicted more than 2,000lbs of suspected narcotics from a vessel in the international waters of the Arabian Sea, December 4.

“I could not be more proud of my crew’s dedication to securing freedom of the seas and fulfilling our national tasking, especially during a global pandemic,” said Cmdr. Robert Watts, John Paul Jones’s commanding officer. “Over the past eight months, my Sailors have been unwavering in their resolve to accomplish the mission.”

U.S. 3rd Fleet leads naval forces in the Indo-Pacific and provides the realistic, relevant training necessary to flawlessly execute our Navy’s timeless roles of sea control and power projection. U.S. 3rd Fleet works in close coordination with other numbered Fleets to provide commanders with capable, ready assets to deploy forward and win in day-to-day competition, in crisis, and in conflict.